We think learning about food and wine is fun. Lots of other people think so, too. Summer is a good time to stretch your tastes and try some refreshing white wines of different styles and from different parts of the world. It is wonderful way to quench your thirsts like one of the old gods on Olympus. 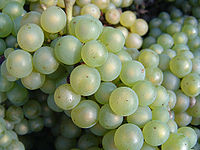 Chardonnay. Probably one of the best known and most widely grown white grapes, chardonnay can vary widely depending on where the grapes are grown, what the wine maker does with them and the method used to make the wine. Chardonnay is usually the basis for champagne and most other sparkling wines. Some are flinty and bold, others are buttery and soft. One reason for this is Chardonnay grapes are relatively easy to grow and can adapt to a wide range of growing conditions. It is often the wine making techniques that affect the taste rather than the grapes themselves. Chardonnay is sometimes confused with Pinot Blanc, because the grapes look the same on the vine. But Pinot Blanc is usually sweeter and found most in Alsace wines of France, Germany and Italy. Chardonnay grapes are also used to make Chablis, the region of France where it is believed to have been first cultivated. In California, most wine makers add oak chips to the fermenting wine to add that characteristic flavor. Frankly, I think they go too far with this, which is why I don’t drink much chardonnay. It goes best with chicken and turkey dishes, maybe even pork. But it doesn’t pair so well with fish and other seafoods because of that oakiness.

Chanin Blanc is found largely in the Loire region of France. It’s also found in South Africa under the name Steen. Chanin Blanc is often a dry wine with lots of apple notes. It’s considered by wine makers to be one of the most versatile wine grapes and is often used to make dessert wines. Grapes allowed to stay on the vine a little longer develop what’s called “noble rot,” which gives the juice a higher sugar content with tastes of honey and peaches. It’s hard to recommend a food pairing because so much depends on the particular style of that winery’s version.

Gewürztraminer is an aromatic wine grape generally found in cooler climates, like the mountains of Germany and Switzerland. The grapes have a reddish color but are not considered a red wine grape, which usually have dark blue, black or burgundy shades. This wine is one of the few that goes well with Asian cuisine. It’s also great with smelly cheeses, smoked fish and game meats. It’s usually a bit sweet without being dessert-like. The best gewurztraminer comes from the Alsace, a region of Southeast France and Southwest Germany that has its own unique character because of that combination.

Muscat is one of our favorite types of wine. The deliciously sweet and peachy Muscato D’Asti is better than champagne for special occasions. The grapes are also grown for raisins and table grapes and to make Muscatel and other fortified wines. And if you ever get the chance, try Pisco, a brandy-like drink in Peru made from muscat grapes. It’s really good.

Pinot Gris or Pinot Gregio. This is a variation on the pinot grape used to make pinot noir. The grapes have a grayish blue color which is how it gets its name. This is another popular grape grown in the Alsace and Northeast Italy. The wine from this grape can be either a little sweet, as the grapes have a high sugar content. But if fermented to a dry wine, you get a higher alcohol content. Most of these wines are light and fruity. They stand up to cooler temperatures and have lots of acid. They go well with spicy appetizers, like calamari with marinara sauce or brochette with tomatoes. 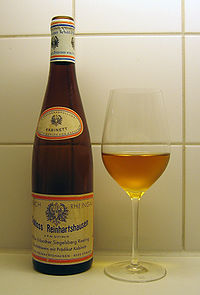 Riesling. This is a sweetish, white wine most associated with Germany. It has a flowery aroma with lots of acid. It is one of the top three white wines produced in the world. It is another colder climate grape. While most rieslings are made to be drunk right away, it does age well because of that high acid content. But you should know that older rieslings tend to get an oily, kerosene taste and smell after a few years that can put some people off. Making wine from these grapes requires special handling so the skins don’t break before crushing. That’s leaks tannins into the juice and gives the wine a funky taste. Riesling goes with a wide variety of food, delicate enough to go with fish but strong enough to stand up to spicy food.

Sauvignon Blanc comes from Bordeaux and it used to make crisp, dry white wine, and dessert wine like Sauterne. This is a wine meant to be drank young and it doesn’t age well. It stands up well to chilling and goes well with fish, cheese or sushi.

This only touches the most well known wines. There are plenty more. As with the reds, there are many blends and brand names that are not listed. Enjoy exploring this wonderful world of wine as food.