First of all, cooking oil is usually some kind of plant-based fat. These came on the cooking scene about 100 years ago. Before that, people used mostly lard.

Lard really does have some good uses, especially for very high heat cooking. For example, you simply cannot make the classic British dish called Bubble And Squeak with anything other than lard. Many bakers prefer lard as the shortening in pie crusts and other kinds of dough. Its problems are: 1) it cannot be used by people with dietary restrictions against the use of pork, like halal or kashrut; 2) it is high in saturated fat which has been linked to health problems like heart disease; and 3) it’s rendered (cooked) pork fat! But on the good side, it’s a good substitute for butter, it can be used at temperatures up to 420° F, and it has a mouth-feel that vegetable fats do not have.

The go-to all-purpose oil for cooking should be something that doesn’t have a lot of flavor of its own and can withstand high heats without burning or smoking. That means vegetable oil, corn, canola or peanut oil. Vegetable oil can be a mixture of different oils or from some lesser known source such as rapeseed. The most common blends are made of palm, corn, soybean or sunflower oils. Other vegetable oils include olive oil, palm oil, soybean oil, canola oil, pumpkin seed oil, corn oil, sunflower oil, safflower oil, peanut oil, grape seed oil, sesame oil, argan oil and rice bran oil.

Some of these oils have raised concerns in recent years because they contain trans fats. Trans fats are especially prevalent in whipped or hydrogenated oil. That process makes fat softer and/or able to stand at room temperatures. But they cause free radicals in the bloodstream which can lead to the creation of blockages in small arteries, such as those feeding the heart.

Our regular oil for cooking is soybean oil. It can handle fairly high temperatures and has very little taste of its own. Also, it is readily available and affordable. I don’t like corn oil because of the flavor and the fact that we eat too much corn in too many things already.

Our second oil, one 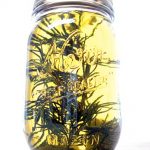 every home should have, is extra virgin olive oil. This designation, compared to other types of olive oil, does not refer to the olive’s sexual history, but to whether it is from the first pressing of the olives. Olives are pressed much the same way grapes are. The first pressing yields the best oil with the best taste. Extra virgin olive oil has a very distinct flavor that is ideal for infused oils (really good with crusty Italian bread) and salad dressings. However, this is not an oil to use for frying or sautéing because it begins to smoke at temperatures as low as 300° F. Often this oil is used in place of butter in recipes.

Your third cooking oil is going to depend a lot on the kind of food you like to make. If you do a lot of baking, you might choose vegetable shortening rather than an oil.

Some kitchens have a fourth oil. We like popcorn, so we keep on-hand a butter flavored oil just for that.

Oils well sealed can be stored in a cool, dark place, like a cabinet, for many months, but not indefinitely. Like all fats, it will go rancid over time and if allowed to be exposed to air for more than just a few minutes. If it’s an oil you don’t use very often, or you use only in very small amounts, like my toasted sesame oil, it should be stored in the refrigerator. You will have to remember to take it out a couple hours before you need it so it can come up to room temperature.