We’re not done yet talking about how to cook some of the most popular and most unlikely vegetables on your dinner table. Why? Because we all need to eat more vegetables. But many of us don’t because we say we don’t like them. Maybe you just don’t know what you can do with them. So, here are some ideas.

This time, we’re talking potatoes, a staple on nearly all American tables.

There are nearly 4,000 varieties of potatoes, all descended from a species originally grown in South America, specifically around what is today central Chile. The name was given us by the Spanish Conquistadores, who found this staple crop being grown by the South American aboriginals. They brought this tuber back to Europe. Today, it is the fourth largest food crop in the world.

No other vegetable I’ve seen has had such a well-known history. Nor is there any vegetable that’s become so versatile in the kitchen. They are in the Nightshade family, which includes Deadly Nightshade, Henbane and Tobacco. These plants contain glyco-alkaloids, which are toxic and can affect the nervous system. Cooking will neutralize most of these. The largest concentration of the toxins are in the stems, leaves and just below the surface of the skin of the potato. They can cause weakness, confusion, headaches, diarrhea, cramps and even coma or death.

All this information also applies to the sweet potato, which may have been the original version and is considered a nutritional powerhouse by food scientists. We’ll talk about that separately. For now, we’re talking about what is sometimes called the white potato.

There are three varieties usually found in our supermarkets: red, russet and gold. There are also yellow and blue varieties but we don’t see them often. Red potatoes are called “waxy,” and tend to hold together better when being cooked than others. That’s why these are the type most often boiled or steamed. 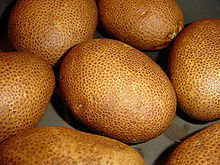 Russets are used for most other applications, such as baking, frying or mashing. Golds have qualities that are between reds and russets and are often seen as the “all purpose” potato. Golds are hybrids with a slightly golden flesh and skin and have a slightly buttery taste.

While the potato is no stranger to most of us, we may sometimes not realize how many ways they can be prepared. We’re going to explore just a few of those ideas to help you see more possibilities for cooking them.

Shopping: Look for potatoes that aren’t too big with firm skins that aren’t wet or papery. Also look for skins that have not been punctured or cut, which allows rotting to set in quickly. As these tubers grow in dirt, the cleanliness of the skin is a secondary consideration. If potatoes are packaged in a bag, smell them. Yes, put that bag right up to your nose and take a whiff. That’s the best way to tell whether they are good and have been stored correctly. You should smell dirt. If there’s any hint of ammonia or any strong smell, those potatoes are bad. You may not see it, but there’s a bad potato somewhere in that bag. It’s a trick some sellers will use to get rid of product they might otherwise throw away. If they’re in a plastic bag without holes, you may want to steer clear, as there’s probably some bad ones in there you won’t find until you get home.

Storage: Potatoes should be kept in a dark and cool place. They should be well ventilated and between 50° and 70ºF. Refrigeration is not recommended unless you have new potatoes. If possible, they should be spread out a little rather than on top of each other. Putting them in a paper bag rather than plastic will also help keep them from going bad. These things will keep decomposition and sprouting to a minimum. While commercial warehouses can store potatoes for months, in your home the maximum time they should be stored is about three weeks, depending on your storage conditions. Preferred storage time in the home is one to two weeks. Light will create green spots. And they should be kept away from pears since the odors of these fruits will ruin the flavor of potatoes.

Preparation: Keep a vegetable brush or scrubber sponge set aside for cleaning potatoes and other root vegetables. Don’t use soap. Just scrub the skins well under running water, removing all dirt. Pay particular attention to the little dents and eyes. Sprouts should be removed and, if not peeling, cut the eye underneath the sprout away. Peeling is optional depending on how they’re to be used. The peels contain lots of fiber and nutrients, but in soup or long cooking methods may come away from the rest of the potato pieces. Any rotted areas, green or black spots should be cut away. Do not put the peels in the garbage disposal, which turns them into a glue that can cause expensive problems. Nor should these be saved for stock since the starch will make a clear stock near impossible. I prefer peeling potatoes over the garbage can or over old newspaper to make disposal easier. They make great compost if you have a place for it. The alkaloids will keep away many pests in the garden.

Boiling: This is one of the most common ways of preparing potatoes and works particularly well with small, new potatoes. Potatoes should be peeled. If larger than about one inch in diameter, they should be cut into halves or quarters. Put the pieces in a pot just large enough to allow about an inch of space above the potatoes. Fill the pot with water until all the potatoes are submerged. Allow room for the water to boil without overflowing. Put the pot over medium high heat without a lid. Be prepared to lower the heat to medium low once the water gets boiling. A pinch of salt in the water once it gets boiling is all the seasoning you should do at this point. Cooking should take about 10 minutes. Test for doneness by seeing if a spoon will break a piece in two. Drain and then add other seasonings as desired or needed.

Steaming: Follow similar procedure as above, but put the pieces into a steamer basket over boiling water for about 10 minutes until the pieces are fork tender.

Mashed or Smashed: Start by boiling potato chunks as above. Make the pieces about a 1/2″ thick and as uniform as possible. Boil just a little longer than usual so the pieces fall apart when prodded. Drain all but about a half cup of the water and return to pot. Add about 2 tablespoons of butter or extra virgin olive oil, salt, pepper, garlic powder and a splash of milk. Use a hand masher to break the potatoes up and stir in the ingredients. Add more milk if needed. Don’t use a mixer as that gives you glue instead of potatoes. The only difference between mashed and smashed is that mashed is usually fairly smooth. But be careful not to overmix them or you get glue again. Many people like lumpy mashed potatoes.

Here we are with only three different cooking methods discussed, and we’ve hardly touched the surface of this topic. As this post is getting long, we’re going to continue this in another post in a couple of days. Stay with me, folks!