Novice cooks always seem to be afraid of making sauces. We have never understood why, exactly. 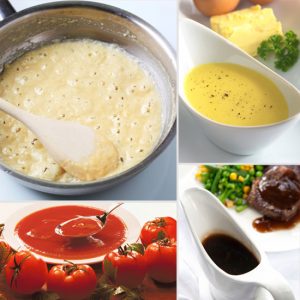 Some sauces are “fussy.” But most are simple and a byproduct of regular cooking.

The first division we can make about sauces is they are either hot or cold. A hot sauce is probably what most of us think of when someone says “sauce.”

An example of a cold sauce would be something we think of as a condiment or a dipping sauce. Ketchup, salsa, tartar sauce or mustard are examples of cold sauces. Some, like ketchup, start out as a cooked sauce. But many are cold throughout. Cold sauces are some of the easiest to make and a good place for novice cooks to begin. 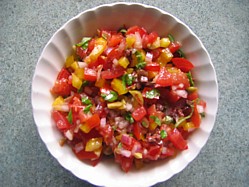 This is one of the best examples of a cold sauce. It’s easy to make, consisting of tomatoes, peppers, onions, garlic, some spices and sometimes herbs like cilantro. The key to good salsa is to allow it time to let its ingredients get together and exchange flavors. It’s best to make salsa the night before you need it.

Hot sauces can be as simple as gravy or as complicated as Bechamel. Hot sauces are used most commonly as an enhancement to an entree or as a part of a dish. Most hot sauces use a roux (roo), a blend of flour and fat, as a starting point. But many begin with some basic vegetable combinations, as in a pasta sauce. 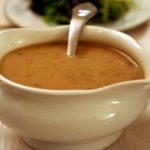 Many don’t think of gravy as a sauce, but that’s exactly what it is. Its shares many of the same elements as a roux. It is also one of the first sauces many cooks learn to make. It is a rustic sauce made from the drippings of roasted or fried meats. Flour is added to the drippings in small amounts. Lots of stirring with a whisk is required. Other liquids can be added, like wine, vinegar, milk, cream or stock. The combination is brought to a boil and then simmered until thickened. This is ideal to do while meat is resting, because it takes about ten or fifteen minutes. 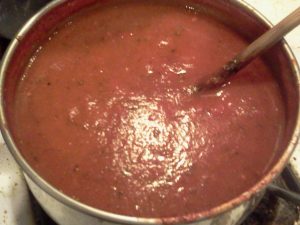 A topping sauce is something like a pasta sauce, the most common of them. Pizza sauce also qualifies. These usually start with some basic vegetables, like celery, onion and garlic, brought together with oil in a pot. Tomatoes or tomato sauce are added along with herbs, water or broth and spices then cooked until the flavors come together. We recommend making your own sauce instead of opening a jar. It does not take much longer and the freshness and quality are so much better. 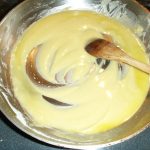 These sauces usually begin with flour and fat. In this category we find the famous four French “mother” sauces, each a basic sauce from which other sauces can be made by adding other ingredients.

The most basic sauce in this group is Bechamel, a simple butter, milk and flour sauce which becomes the base for cheese sauce among others. These can be toppings, but they can also be essential to a dish, like lasagna or Eggs Benedict. 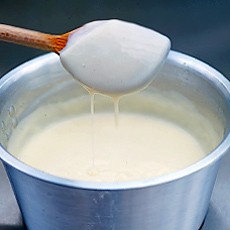 saucepan over medium heat. A 1/4 cup of all purpose flour is sprinkled in a little at a time, whisking constantly. Stir until the mixture is smooth and begins to brown. It takes about 7 minutes to reach of golden sandy color.

Whisking continuously, slowly stir in 1 quart of milk. Bring the mixture to a gently simmer, barely bubbling, then lower the heat to medium-low. Cook for 10 to 20 minutes, stirring frequently until the mixture no longer tastes gritty. Season with a coupe teaspoons of salt and some freshly grated nutmeg. Remove from heat.

Now you can add cheese or other ingredients if you want more than just the usual Bechamel.

The key to most sauces is lots of stirring and gently handling. Sometimes a sauce “breaks,” meaning it separates. Usually, adding a little more liquid under a low heat will fix a broken sauce.