There’s more than one way to cook a vegetable. As we continue our series of posts about cooking vegetables, it’s time to look at one of the most popular green veggies in the produce aisle. 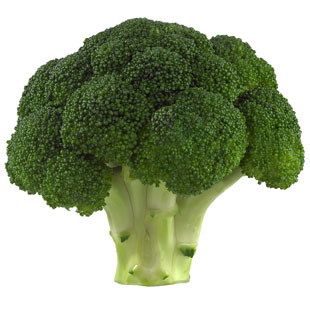 No matter what former President George H. W. Bush (I) says about it, broccoli is a nutritious, versatile green vegetable. It’s found on lots of tables every night across the country.

Broccoli was cultivated from a wild cabbage found in Roman Italy 2,000 years ago. It is in the same family as cabbage and cauliflower. Most of our broccoli comes from California. The U.S. is the third largest producer of broccoli and cauliflower, behind China and India. It’s a cold weather crop, growing poorly in warm, summer weather. If not harvested, the heads, or flowers, will turn a bright yellow.

Nutritionally, eating it raw has the biggest bang for the nutritional buck. The more it is cooked the less nutritional value it has. But even fully cooked, it still packs quite a punch of phytonutrients and cancer-fighting compounds.

Buying. While broccoli that’s gone too far in the field turns bright yellow, the ones you choose in the store should be dark green with a slightly purplish cast to the florets. The heads should be tight and firm. There should be no yellow or brown spots on either the heads or the stems. Broccoli is usually sold by weight, so often people are more likely to buy the florets only. But many cooks and chefs swear by the stalks, so you might want to give the whole thing a try.

Preparation. Chop the heads off the stalk. Some people like to peel the stalk like a carrot. Cut the stalk in half and cut into half-moon shapes about 1 inch thick. Whether you separate the head into florets is up to you and the method you’re using to cook it.

Steaming is one of the most common ways to cook this. One of the easiest, too. Just put all the pieces in a steamer basket in a large pot with about 2 inches of water in the bottom. A tablespoon of lemon juice will help the water give off a nice flavor and fragrance during cooking. Steaming can take as little as 5 minutes or as long as 15 depending on how hot the water is and how much broccoli is in the basket. Sprinkle kosher salt over still damp florets and stalks when done. I also like to splash some good balsamic vinegar on it instead of butter. Serve immediately.

Microwave. Just put the pieces into a glass baking dish, cover tightly with plastic wrap and heat on high until tender, about 4 minutes.

Roast in a 400° oven by laying the pieces out on a cookie or baking sheet after coating with extra virgin olive oil. Turn after about 5 minutes and should be done in 10.

Broccoli also goes well with a sauce, quiche or frittata. In all of these uses, it should be at least partially cooked before added.