This is one of the favorite soups in The Bachelor’s Kitchen. After all, what bachelor doesn’t like a cheeseburger?

This soup is rich, with lots of vegetables and cheese. 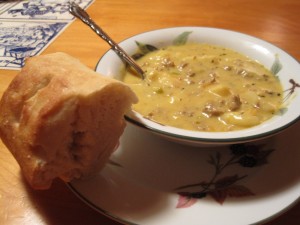 This recipe works best in a dutch oven, but any large pot will do. Preparation work begins with cutting up your vegetables. Chop into small pieces an onion, two or three carrots (depending on size, you want about 3/4 cup), a rib or two of celery and four cups of cubed potatoes. This might be a good time to cube about 2 cups of cheddar cheese. We like sharp cheddar, but select what’s best for your tastes.

Other ingredients are a half-pound of ground beef, 3 cups chicken broth, one and a half cups of milk, a quarter cup of sour cream, a quarter cup flour, four tablespoons butter and a teaspoon each of dried basil and dried parsley.

With your ingredients lined up, it’s time to put a large pot on medium heat. Add one tablespoon of butter. When melted, add the vegetables and beef and cook until the beef is browned. Stir in the dried herbs, broth and potatoes. Bring it to a boil, then let it simmer on medium low heat until the potatoes are tender. That should take about 12 minutes.

In a microwable bowl, melt the remainder of the butter (because of the wide variance for microwaves, we aren’t recommending a particular time or power). Stir in the flour. Add the milk and stir until the mixture is smooth.

While you stir the soup pot, slowly add the milk mixture. Bring the pot to a boil, then lower the heat back to a simmer. Stir in the cheese. When that is fully incorporated, add the sour cream and let that get heated through. Be careful not to let this come to a boil.

This is not a low fat soup. But it tastes good and goes well with some warm, crusty bread.