Mashed potatoes are one of the most basic comfort foods. It’s also one of the most popular. But after a while, we suspect even a classic favorite like this can become a little boring. And don’t even get us started on that awful instant stuff.

We came along this variation on that traditional classic and it turned out really great. So, naturally, we’re passing it along to you in The Bachelor’s Kitchen. 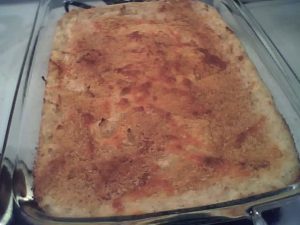 Of course, one starts with potatoes. I like Yukon Golds for mashed potatoes. That golden color and slightly buttery taste make simply great mashers.

Next comes the dairy. If you’re lactose-intolerant, this is not the dish for you. But if you love cream and cheese, this recipe will elevate ordinary mashed potatoes into something special. In this dish are sour cream, cream cheese and shredded Parmesan cheese.

Now take all that, put it into a baking dish and top with some bread crumbs, some extra virgin olive oil and a bit more cheese, pop it in the oven and you’ve got a delicious dish for a special occasion, a pot luck supper or any old Sunday dinner.

The dairy portion is where the fat is. But you can reduce that substantially by using low fat versions. Sour cream is available with little or no fat and the taste is close enough to the full fat version that you won’t notice the difference in this application. But I do admit that on a baked potato, you can taste the difference.

The same thing is true for the cream cheese. You can reduce the fat a lot by using Neufchatel, which is a low fat version of cream cheese. You’ll find it right next to the regular stuff. This is the block type, not the whipped stuff in the tub.

This dish starts the way you’d start any mashed potato recipe. This recipe makes plenty for one or two, but easily can be doubled for a group.

Start with four large russet or Yukon Gold potatoes. We prefer gold for this. While peeling and cutting into roughly ½ inch cubes, put a big pot of water on high heat to boil. When boiling potatoes, as you would with pasta, make sure you have a lot more water than just enough to cover. When the water begins to boil, add about a tablespoon of salt and allow the water to return to a boil before adding your potato cubes. Cook at a simmer, not a rolling boil, until the potato pieces are tender enough to stick a fork into them easily. Try not to overcook them. You’ll know you’ve let them go too far if the cubes fall apart when you stick your fork into them. Drain and return to the pot or a large bowl. It’s time to mash.

If you like smooth potatoes with no lumps, then use a hand mixer to whip them well. But I prefer a more rustic approach and just use an old-fashioned potato masher. My argument is that over-whipped potatoes turn into a gluey consistency that reminds one of the library paste we all used to eat in kindergarten. I think a few lumps add character. Also, you still have ingredients to add. So, a quick smash, just breaking the potato pieces up, is all you need.

Add in ¼ cup sour cream, 4 oz. cream cheese, a 1/2 cup of shredded Parmesan and a little salt and pepper to taste. Stir gently to combine.

Preheat the oven to 350ºF. Take a large casserole dish and spray with cooking spray. Pour your potato mixture into the dish, sprinkle another half-cup of shredded Parmesan over the top, along with a cup of Panko bread crumbs ( you can also use homemade) and even a bit of cheddar cheese, about ½ cup. Drizzle extra virgin olive oil over the dish and it’s ready for the oven.

Bake at 350 for about 20 minutes, then crank up the heat to 450 to brown the top. Watch your dish! Be careful not to burn it. Allow the dish to cool for about 10 minutes before serving.

These re-heat very well with a one-minute shot in the microwave covered with wax paper.