The season for holiday entertaining is right around the corner. No sooner do we finish with Thanksgiving than we start getting the holiday party invitations. There are the office parties, get togethers with family and friends and maybe your own little gathering. Whatever the event, the possibility of being asked to “bring a little something” is quite high.

You know someone will bring a simple veggie and dip plate. A cheese platter is also quite common. More enterprising people might bring a slow cooker full of Swedish meatballs or a chili-cheese dip. The lazy guy in the office will bring a bag of chips or a store-bought cake. This is a chance to see the true creativity of the other people you interact with all the time.

I know I have been guilty of being less than creative. I’ve been that guy with the bag of chips or tub of commercial potato salad. 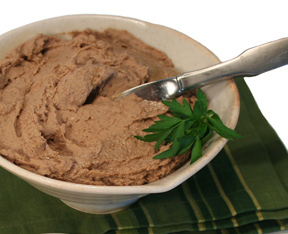 But you can really surprise and delight the others at the party without going to all the trouble of deviled eggs or cliché of spray cheese on a cracker.  Fancy parties serve paté.

Paté is basically some sort of chopped liver. The most famous version of this is froi gras, chopped liver of a goose or duck. But you can make your own simple paté right at home without the big expense. If you do it right, no one will know you didn’t spend big bucks for their enjoyment.

Chopped chicken liver is most commonly used for appetizers. You can use that to make a paté. But if you really want to save money, try braunschweiger. 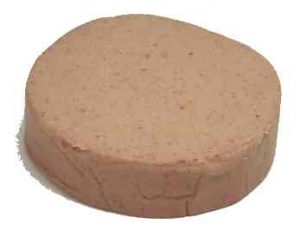 Also called liverwurst or liver sausage, braunschweiger is essentially chopped liver. Traditional German braunschweiger is made using fatty pork liver with various seasonings and then smoked. Commercial braunschweiger in the U.S. is less pure. Typically, it contains a combination of pork, beef and chicken liver and other meats including mechanically separated meat and organs. The USDA says it has to have at least 30% liver, although most brands have at least 40%. Seasonings can include salt, pepper, smoked bacon, mace and onion powder.

While the fat content is high, braunschweiger is healthier than most other lunchmeats or sausages. Because it’s mostly liver, it contains high amounts of Vitamin A, iron and protein.

To make an easy paté, start by letting 8 ounces of braunschweiger and an 8 ounce package of cream cheese or neufchatel (low fat cream cheese) sit out on the counter for about an hour to soften. Put the braunschweiger and cream cheese in a mixing bowl and add a tablespoon of minced onion or onion powder, 2 teaspoons of lemon juice and a teaspoon of Worcestershire sauce (low sodium if you can find it). You might also add a few grinds of pepper. Use white pepper if you have it. If you want to do something with a little kick, add a tablespoon of dijon or brown mustard or creamy horseradish sauce. Mix together until everything is evenly distributed. Cover with plastic wrap and put in the refrigerator for at least an hour to allow the flavors to mingle.

If you’re putting this out on a buffet table, form into a ball before refrigerating. Then all you have to do once it’s cooled is transfer it to a plate and surround with crackers and a knife to let folks serve themselves.

But if you really want to impress people, get out a piping bag or take a gallon-size plastic storage bag and cut off a bottom corner about 1/8 to 1/4 inch from the edge. Let the paté mixture warm up a little on the counter to soften, then spoon into the piping bag. Now you can pipe out the paté into cute little swirls or other designs on the crackers and serve on a tray, just like they do at the fancy parties.

You could even come up with your own combination to make a pate that’s a little different. Only you have to know you made this for just a few dollars. And when people ask you where you found this wonderful paté, tell them you made it yourself, in The Bachelor’s Kitchen.