It’s time to dig into the archives once again and re-post some of our favorite articles from the past. Here’s one about one food item you’re probably planning to make for Thanksgiving. The more you know about your food, the better job you do cooking.

We continue our series of posts about cooking vegetables with a look at sweet potatoes. We’ve already talked about cooking white potatoes, the kind we’re all so vary familiar with. Many of those same cooking methods can apply to sweet potatoes. But these nutritional powerhouses have a few different characteristics from regular potatoes. They are considered especially beneficial for diabetics as they help control blood sugar and reduce insulin resistance. 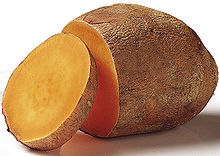 Like its distant cousin, the white potato, the sweet potato originated in tropical South America and was first cultivated some 5,000 years ago. Sometimes we see them called yams, but that is a misnomer. Yams are a large root found in Africa and Southern Asia that is completely unrelated to the sweet potato. The name was applied in the Southern United States by African slaves who saw the sweet potato as similar to the yam they knew in Africa. But true yams are about 10 times bigger than the largest sweet potato, have a yellowish flesh and is barely edible. Sweet potatoes, on the other hand, are not only edible, but loaded with nutrition.

These root vegetables spread around the Pacific and are now staple crops in New Zealand, Polynesia, Japan and the Philippines. They like warm climates with a moderate amount of rainfall. They don’t like the cold or conditions that are too dry or too wet.

Although the roots are largely what most of us eat, the leaves and shoots are also edible and are used as you would other greens.

Shopping: Look for dry skins with tapered ends and a minimum of blemishes. There are several common varieties such as jewel and beaureguard, but the differences between them are largely a matter of availability and personal taste.

Preparation: Wash the outsides and keep the skins on if baking like a regular potato. Most people prefer to peel them as the skins are very fibrous and don’t taste very good. Trim off any brown spots. They can be cut into chunks, disks, wedges, planks or whatever shape you choose for the dish you’re making.

Candied: This is the way most of us are exposed to sweet potatoes. It’s a traditional Thanksgiving dish. Chunks of sweet potatoes are baked in a casserole with brown sugar, maple syrup or molasses and topped with marshmallows. There are many variations using orange juice and other sweet ingredients.

Microwave: Like most vegetables, sweet potatoes are easy to cook in the microwave. Just cut into even one-inch pieces, place in a glass dish with a half cup of broth, cover and heat for five to eight minutes until soft. You can also just take the whole root, pierce with a knife or fork several times and heat on high for eight to 12 minutes, just like a regular baked potato. Top with butter before serving.

Sweet Potato Pie is a traditional Southern treat, made in the same way as pumpkin pie. This is usually sweeter.

In Kentucky, you might find sliced sweet potatoes fried in bacon grease and served with bacon on toast for breakfast.

Fries: Sweet potatoes cut into wedges or planks can be deep fried. They also can be coated in olive oil, sprinkled with salt, pepper and cinnamon, then baked in a hot oven until crispy.

Braising: Cut sweet potatoes into one-inch thick pieces and add to a skillet with a cup of broth, a teaspoon of honey and a pinch of thyme. Bring to a simmer over high heat, then cover and turn heat to low. Cook until almost tender, about 15 minutes, then uncover and reduce the liquid to a glaze.

Boiled or steamed are common means of cooking chunks of sweet potato. Finish with a little salt and nutmeg.

Mashed: Sweet potato pieces are boiled and then mashed with a little milk or cream and butter. A casserole can be made by putting the mashed sweet potatoes into a baking dish and topping it with chopped pecans and a little brown sugar.

Roast wedges of sweet potato in a 500º oven for 20 to 25 minutes. Drizzle with extra virgin olive oil and turn the pieces over halfway through. Finish with a sprinkling of salt.

International flavor: In Korea, sweet potato has become a popular pizza topping. Japanese use it for desserts and making a liquor called imo-joshu. On many streets in China, sweet potatoes are roasted in large drums in winter months. In many African countries, sweet potatoes, along with other root vegetables, are sun dried and eaten for breakfast or mixed with cassava to make a staple starch food.

Other uses for sweet potatoes: In South America they are combined with lime juice to make a cloth dye. Taiwanese business are making fuel from them. And in all places where sweet potatoes grow, the greens and stems are used for animal feed.

Do you have a favorite recipe? If so, we’d like to hear about it. As you can see, sweet potatoes are just about as versatile as the white potatoes, but with a higher nutritional content. They are worth a try.