When I was a kid, we were taught in school about the four basic food groups. A balanced diet included foods from each of those basic groups at every meal. When it became clear that the amount of food from each group was also a factor, the U. S. Department of Agriculture came up with the Food Pyramid. The Pyramid contained a greater number of divisions than just the four and also weighted the groups by quantity. Carbohydrates were at the base, the largest portion of people’s diets. Sweets and fats were at the top, the smallest portion.

I have had problems with the Food Pyramid. 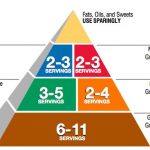 And I’m not the only one critical of the Food Pyramid. Many nutritionists and educators have called the Pyramid too complicated, trying to do too much and too hard to follow for the average person. One of those critics is former First Lady Michelle Obama.

“Parents don’t have the time to measure out exactly three ounces of chicken or to look up how much rice or broccoli is in a serving,” she said.

But for all its faults, the Food Pyramid was a good teaching tool for educating us about nutrition and what we should be eating. But now that’s gone.

The USDA has replaced the Pyramid with the Plate. 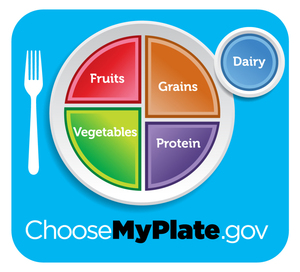 In many ways, this is going back to the old four food groups. But it’s laid out in a much better way. The agency and health officials hope this simplified layout will be easier to understand and follow.

If you look at the Plate, you notice that half the plate consists of fruits and vegetables. This goes along with the changes I felt were needed in the Food Pyramid.

You’ll also notice that dairy is on the side. This goes along with much of the current thinking on nutrition. Dairy is highly processed and usually high in fat. More and more people are giving up dairy and switching to alternatives like soy milk and rice milk. While those alternatives won’t replace dairy in all cases, such as cheese, they are an improvement, being cholesterol- and fat-free.

Another difference is the role of meat. It’s not even mentioned! Instead, we have a smaller proportion of protein, which can be from many sources including vegetables. Grains still hold a big portion on the plate, but that still leaves a lot of options besides bread.

Fruits are the only sweets on the plate, reflecting the need to cut back on sugar. Fruits, like protein, are a smaller portion of the plate. So, it’s not quite like the four basic food groups, but it’s a lot more realistic than the Food Pyramid or the equal portions of four groups.

According to John Stanton, who heads the food marketing program at St. Joseph’s University in Philadelphia, a simple plate is a good idea from a marketing point of view.

“The consumer spends maybe a maximum of three seconds looking at a food in a grocery store,” he says. “Can you think of a busy mother trying to put delicious, nutritious food on the table, looking at a pyramid?”

I like the change and I think it more accurately reflects not only current nutritional knowledge, but is a better fit for modern American lifestyles. What do you think?