You’ve probably heard that brown rice is better for you than white rice. The same is also true for whole wheat flour versus white flour. The questions arises, why?

Nutritionists say the whole grain, no matter what type of grain, is better because it contains a lot of fiber, something our bodies need to keep our digestive system clean and efficient.

But, if that’s the case, why are white rice and white flour so common? 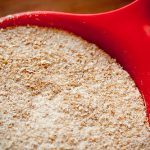 It all comes down to storage. Brown rice and whole wheat contain fat that can spoil in a relatively short amount of time. When grains are milled, the outer coating, or husk, is removed, which reduces the fiber. The germ, usually found just beneath the husk, contains fat, protein and an embryo and is also removed in milling. It’s this bit which can spoil so easily.

Think of a grain, or seed, like an egg. There’s a shell to protect the delicate organism inside. There’s a white part containing protein and carbohydrates to support the organism. In a seed or grain, this is called the endosperm. The germ of a grain is the same as the yolk of the egg, containing fat, or stored energy, for the embryo which is attached to the yolk or germ.

While whole grain is better for you, white rice (and even white flour) are better for you than no grain at all. Rice is a much better side dish choice than potatoes or bread.